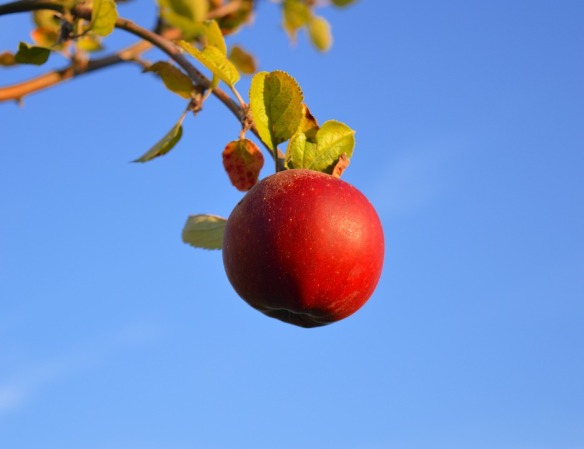 My pastor-husband believes he witnessed our oldest son’s first sin. Teen was less than a year old, nine or ten months, and exercising his newly-gained crawling and climbing independence. Even though we had covers on all the electric outlets, we still wanted our babies to learn not to touch these at-their-level wall plates. Guy called baby Teen’s name, and Teen promptly turned to look at his dad. Guy spoke clearly, “Teen, no. Do Not Touch.” Teen looked at the wall plate, at his dad, at the wall plate, and touched.

Of course he touched! In describing this scene, Guy says he saw a look of willful disobedience flit across Teen’s little face. We’re not child development experts, so maybe that’s not even a developmental possibility. Yet we do have first-hand experience with the human heart and its inclination to do the wrong thing. Touching the wall plate sure looked like giving in to the insatiable curiosity of temptation.

We all recognize that desire can increase in direct proportion to the word, “No.” Not in every case, perhaps, but often enough that it seems to be one of life’s generally accepted truths. I bet you don’t have to ponder long to come up with an example from your own experience:

When did you grasp the suddenly irresistibly attractive forbidden fruit?

Anything from a sweet you don’t normally crave but now that you’ve determined to eat healthier you can’t stop thinking about to an off-limits relationship, no’s inconsequential and monumental cause us to reach for that which we should not take. Just like Eve and Adam in the garden, reaching up to grasp, then bite and share, that fruit over which God had pronounced a resounding, “No.”

Joseph, however, found the strength to respond with his own “No,” to not only resist but flee temptation. Genesis 39 continues the story of Joseph, the once-hated younger brother sold into slavery (Genesis 37), now the grown-up house slave of one of Egypt’s most powerful men. The stories of his youth didn’t explicitly mention the Lord, yet now that Joseph is away from God’s people, a stranger in a foreign land, the Lord makes His presence known, blessing Joseph and everything he touches so that even his Egyptian master recognizes that the God of Israel is with Joseph.

Always one to engage the drama, I feel sorry for Potiphar’s wife. Don’t get me wrong: she’s the “bad guy” in the tale, and I don’t condone her actions, but I feel for her. Her powerful husband seems to have forgotten her. He has handed the reigns to Joe and thinks only about what he’ll have to eat, without thought for his wife.

Unlike Potiphar, Joe is always on hand. He handles all the business and anything else she might need and, well, she’s decided she’s got a need this good looking guy can meet. Understand, if the gender roles had been reversed–if Potiphar had made a request of his female house slave–she would not have been free to say no (and, honestly, we don’t know that didn’t happen…). Which probably adds to Wifey’s frustration. Joe’s “No” makes him that much more desirable, and she doesn’t have the power to demand that her husband so easily wields, solely by nature of his gender.

Joe knows to whom he belongs. God is with him. Saying yes to Potiphar’s wife means saying no to God, and he’s not willing to go there. After all, God turned his brother’s dastardly deeds into a darn good situation. For a slave, at least.

Joe stays entirely out of her way until she lays a trap for him. Thrusting herself upon him, he wriggles out of her arms and out of his cloak. I’m sure she’s thinking, “If I can just lay my hot lips on his face, he’ll give in. He’s a man, after all…” She underestimated Joe’s commitment to God. She underestimated Joe’s commitment to integrity. She has his cloak. She lies.

Joe does the right thing and gets burned for it. Thrown in prison, I bet he remembersg the last time he got thrown in a pit. God turned that around, and God can do it again. Where some would give in to discouragement, Joe remains faithful to his God.

Connect
Who strikes you as a model of integrity and why?

Study
Read aloud Genesis 39.
Genesis 37 lacked explicit mention of “the Lord.” Why do you think God shows up here?
How does God’s presence with Joseph affect his situation (vv. 2-6)?
Do you think Joseph knew the risk involved with refusing Potiphar’s wife? How did he stand his ground (vv. 6-12)?
What resulted from Joseph’s determination to resist temptation (vv. 13-20)?
How do you think Joseph felt about this new turn of events?
Compare the stories in Genesis 37 and 39 (for example, in both Joseph has done nothing wrong, is betrayed by those close to him, etc). Why do you think we get two similar stories about Joseph? What does that add to our knowledge of him? Of God?

Live
Have you ever done the right thing and paid an unfair price for your action? What motivates you to do the right thing the next time?
Discuss other biblical and real life examples of integrity (for example, Daniel). What do you gain by their examples?
Temptation comes in many forms. What helps you resist temptation?
How do you hold on to the truth of God’s goodness when holy action gets you burned?
What are the benefits of living a God-honoring life?
What is Jesus saying to you through this study, and how will you respond?

Pray
Pray for awareness of God’s presence with you and the strength to resist temptation and live a God-honoring life.