The fickle spring weather turned chilly again just as half our family returned from a house building week in Mexico, overtired and weezy from dust. I decided a hearty pot of lentil soup might do the trick: warm and comforting, restorative in the best ways.

Ten years ago I couldn’t tell you if I had ever eaten a lentil. A new friend brought over a package of lentils as a salad additive and I looked at them as if she’d handed me a seed packet; they might do something great, but I have No Idea what to do with them…

These days lentils are one of my go-to ingredients. They’re easy, yummy, eat them simply or add them to almost whatever. Inexpensive and healthy to boot.

But there are lentil soups and more lentil soups. I’ve made many and they’re good, fine, meh. I needed a better-than-the-rest lentil soup to clear away the fog and funk. I read several recipes, improved on the base of one with additives from others, and I think I’ve got it.

So I checked other recipes, compared ratios, and added celery. I omitted the oil and salt, because why add them? The canned tomatoes and veggie broth add enough salt to flavor. Then I found a perfect zucchini in the crisper. Why not add zucchini to a lentil soup? Maybe that’s a little ‘minestrone’ of me, but I tell you, it worked. And if I hadn’t had a zucchini, I would have added a drained and rinsed can of garbanzo beans. More veggie goodness = great!

And then I oops-ed by confusing curry powder with ground cumin, almost the same color. The ratios were meant to be two teaspoons of one and one of the other, but I did two of the wrong one…and found out it wasn’t wrong. To the contrary, it was just more right.

A couple of weeks ago, Tween and I were watching a cooking show. Of course they were preparing some dish, or many, that included meat. He commented, “Sometimes I wish I could eat meat. I might like to try something like that.”

I get it, Buddy. I really do. I ate meat for 20+ years of my life until I gradually realized I didn’t any more. And now I don’t, and don’t want to.

I told my kiddo: “You know, their food probably tastes great. But it’s not as healthy for their bodies or the planet. And because they eat meat they eat less veggies, which are better for bodies and the planet. I truly believe they are missing out. Not us.”

This lentil soup reminds me of that conversation. The desire for a fab lentil soup elicited greater creativity and led me to a fab end result. I’m not missing out. Not at all.

This past weekend Teen came home early from an event and put himself to bed because he felt so sick. The next day I discovered the truth: he wanted to try it, so he’d had a few bites of chicken. However, his system didn’t want it, and those bites of chicken are still biting back three days later. (In terms of rebellious teen behavior, I don’t feel too badly…)

As he recovers, you know what he asked for? Another favorite veggie soup. Bring it on! 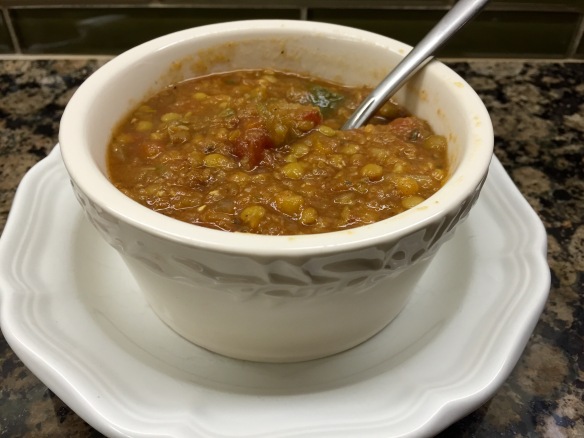 In a large soup pot over medium-high heat, add chopped onion, carrot, and celery. Cook, stirring often, until the onion has softened and is turning translucent, about 5 minutes. Add garlic, zucchini (or chickpeas), cumin, curry powder, and thyme. Stir constantly for about 30 seconds. Add undrained tomatoes and cook for a few more minutes, stirring often.

Pour in lentils, broth, and water. Add red pepper flakes and freshly ground black pepper. Bring to a boil, then partially cover and reduce heat to a gentle simmer. Cook for 30 minutes, or until lentils are tender.

Remove pot from heat. Using a stick blender, gently pulse to puree some of the soup. Alternately, transfer 2 c of soup to a blender and purée until smooth, then pour puréed soup back into the pot. Add chopped greens and stir until wilted.

Remove the pot from heat and stir in the juice of half of a lemon. Taste and season with pepper and/or lemon juice until the flavors really sing. Serve immediately.

Note: Produce varies wildly by size. For me, this recipe was about 1/2 of a large onion, 2 exceptionally fat carrots, and 6-ish skinny celery stalks. So I approximated about 2 cups of each. If you have a little more or less of an ingredient, you’re fine. Also, if you have a 28-oz can of tomatoes, just add a little more water or broth. Don’t sweat yourself, just sweat the veggies 😉