Shortcuts aren’t necessarily shorter.
Our 500-mile drive from San Francisco to San Diego comes in two parts: the long, fast leg between home and the Grapevine; and the shorter-by-distance long-by-traffic leg through Los Angeles. With no traffic on Leg 1, Tween and I stopped for a quick bite almost an hour ahead of schedule. So imagine my dismay when Google Maps reported that Leg 2 was going to take us, not two to three hours, but almost five. If you’ve driven through LA traffic, you understand this particular version of hell.

I called Guy who, checking his computer, confirmed that 5 South was a parking lot all the way down the coast and that the inland route was clear. I wish I had sucked it up and trudged ahead through the gross reality of traffic-induced time loss. Because I had to anyway as our shortcut became a long-cut: the inland route developed its own congestion by the time we got there and added an hour to the already-too-long trip. Typically it takes us seven to nine hours door-to-door; this time it took eleven. And we missed the coastal scenery.

Be earlier than you think you need to be.
Guy and Teen missed the long drive because Teen took the ACT that morning. They also missed their flight to San Diego. Guy got the time wrong in his head. BART ran late, and then they missed the shuttle bus connecting train station to airport. They dashed through security and ran through the airport to arrive as the airline shut the doors.

They got on the standby list for the next flight. After all passengers—including my guys—had boarded, a mechanical problem was detected with the plane and everyone had to disembark. There was some debate about whether they would shuttle passengers to another airport, but somehow the airline ‘found’ a plane and the flight was rescheduled only somewhat delayed from its original departure time. 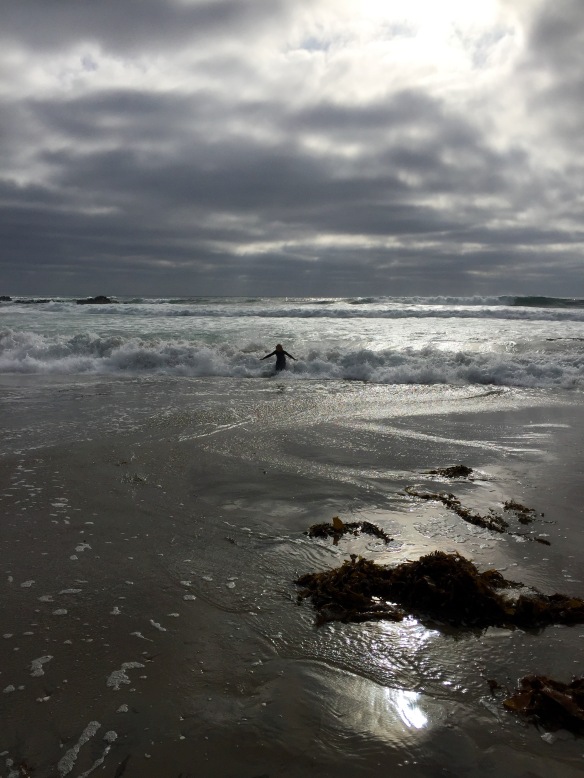 Respect the elements.
In pairs of two, we raced to San Diego to celebrate our Nephew’s high school graduation. As a graduation gift, we rented a beach house in Mexico for a couple of days and took Nephew and Grandma on a short vacation—hence the need to have our van with sufficient seating plus room for luggage, food-stuffed cooler, drinking water, wet suits, and towels.

Just over an hour from Grandma’s house to beach house, we hit the beach mere minutes after unloading the car. The three boys sprinted ahead, stripping off shoes and socks as they ran along the sand.

Tween’s flip-flops took their own journey, presumably on the tide. He didn’t say anything as he walked barefoot back to the house; it’s just his style to keep quiet. When he and Guy went back later they faced the fact that, in not carefully placing them out of the way on some rocks, he hadn’t just misplaced them but given them as a gift to the ocean.

Be prepared.
Freshly bathed and in PJs after his ocean romp, Tween decided to light a fire in the gas fireplace. He turned on the gas and then turned around to get the lighter. He should have reversed that process, as he had turned the gas on much too high and allowed too much time. As he pulled the lighter’s trigger, a fireball exploded from the fireplace and momentarily engulfed him in flames. Thankfully Guy was close by and turned off the gas as Tween jumped backward and out of harm. Another shower revealed that Thank God the damage wasn’t worse: one singed eyebrow and his long blonde hair got an unanticipated trim.

Celebrate.
Though the initial drive was maddeningly long, Tween and I made the best of it as we deemed it “an adventure,” something to talk about for years to come. We celebrated with Nephew, family, and friends at his party. The next day we celebrated with his church. We celebrated in Mexico, giving the gift of experience that will last in memories rather than more stuff. We relaxed at the beach, we chuckled at the donkey and dogs who temporarily escaped their home to cavort on the sand, and we savored traditional food and drink. We played games and made conversation. We laughed.

Vacation may not always be easy. Tween remarked, “I’m sure learning a lot considering school is out.” He learned lessons on this trip better to learn at 12 than 40+. But time together, even bored in a car on I-5, is worth it. And what a way to kick off summer!